Yesterday we ate at a restaurant in Esslingen that was fantastic. The restaurant was made up of several old businesses and buildings. There was a bakery dining room that had a huge tiled oven as big as a small room. We ate in the wine cellar that was far enough underground that my network connection was lost. I took one photo and it turned out OK. My order was for a small Maultaschen appetizer with wild garlic in cream sauce. Maultaschen are like ravioli filled with delicious German ingredients.

For supper, I had local white asparagus. It's asparagus season here. That das topped with bearnaise sauce. It was served with two crepes and pork schnitzel. I just realized I never took a picture of any of it! I was pretty hungry and I got started right away. 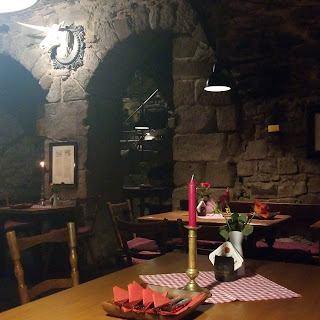 The restaurant is the Einhorn (one horn) and you can see the unicorn on the wall. The stone steps lead down into this beautiful and cozy room.

This is the Frauenkirche in Esslingen. Although this town is near bombed-out Stuttgart, it wasn't bombed in WW2.

The church is massive. Here are people standing in front of the locked door to give perspective  I put a video of the building on Instagram  It's impossible to photograph the entire thing

Earlier in the afternoon, we sat in a lovely biergarten for a drink and conversation

When I first got to Germany ,I had a network connection for my phone. When I arrived at her house  I couldn't access her wifi. Then my network connection was gone  Finally Verizon called me and we got sorted out. Then here at the house, we figured out what was wrong and I got wifi.

I spent the day at the house because we've been doing so much. Last night I was zonked and I slept until 11am. I did laundry and made part of tonight's meal. I walked into the bigger town (opposite direction from the small town) and now I'm tired. Whew!

Bought bread at a bakery on the square and conversed 100% in German. She said my German was pretty good and then asked if I was British! 🇬🇧 🇩🇪

We had done a historic walking tour of this town a few evenings ago, but I left my phone at home. Today I took a few photos, but the light was awful. They're on Instagram. I also met a cat, so I sat down and rested.

Tomorrow I'll be back in Stuttgart and I'll play the tourist and maybe pretend to shop. We went to the thrift store at Patch Barracks. I got two shirts and a skirt. The skirt is because it's supposed to be really hot this weekend and we'll be out and about both days.

So far, this vacation is going the way I had hoped. I miss my home, but I'm glad I did this. 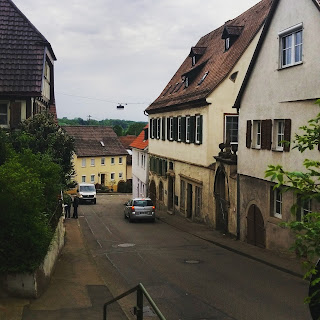 I lightened this one
This is a historic building built many centuries ago  It was owned by the church. Behind it is a convent. It's currently apartments  Down where the white house on the right begins, someone is raising pigeons. 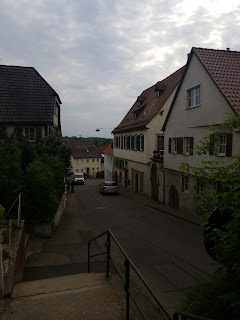 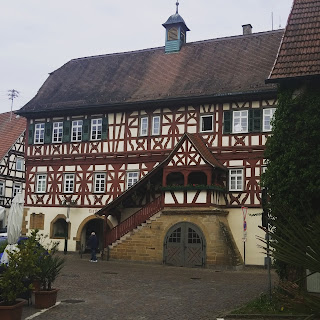 This is the original government building. Apparently the river has flooded many times and this building had flood marks on it. They're chiseled into the stone.
Posted by Caron at 12:18 PM 1 comment:

Time for a little relaxation before my first day of vacation  I've been busy at work, which doesn't make leaving easier. 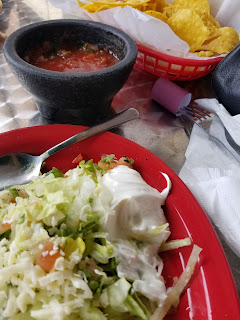 I got flowers at work today. I've been doing this job helping people find jobs since 2004 and today's the first day I've gotten such a wonderful surprise. 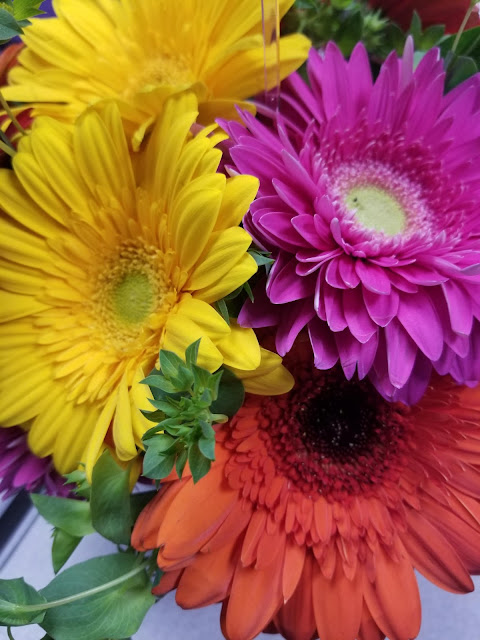 I went on vacation! to South Carolina!

There I was answering questions and not linking to blog memes and then Ba-bam! I disappeared.

I went on vacation and forgot to tell you. I have a friend in South Carolina and I decided I needed to look at her in person because she is sick and I wanted to know how she was really doing. What's the best way to do that? Impose myself into her house and have her make coffee for me every morning.

And then, when she drops me off at the airport, I imagine she sighed deeply to express her relief as she drives away.

Then 30 minutes later she gets a text from me: "I need you to come back."

Well, super. The good news for me is that she turned around and came back to the airport and didn't make me sleep on a tile floor or dirty carpet at my gate. Those were my only choices otherwise, because as you know if a flight is cancelled due to weather, they do nothing for you. I remember saying something about not having a car and what am I supposed to do now and she said, "That really isn't my concern."

You see, apparently United Airlines cannot fly in the rain. I imagine they have an algorithm somewhere that states: If it rains at (X) destination, then flights that are not full from any other destination shall be cancelled. Combine them the next day and save moolah.

You'll never guess, so I will tell you right away: It was raining in Des Moines.

I spent the entire day wandering around O'Hare airport sending tweets to @United telling them someone had crushed a cookie into the carpet, there was coffee spilled on the wall, the air conditioning wasn't working and so on.

I saw the crazy shoes people wear when they travel 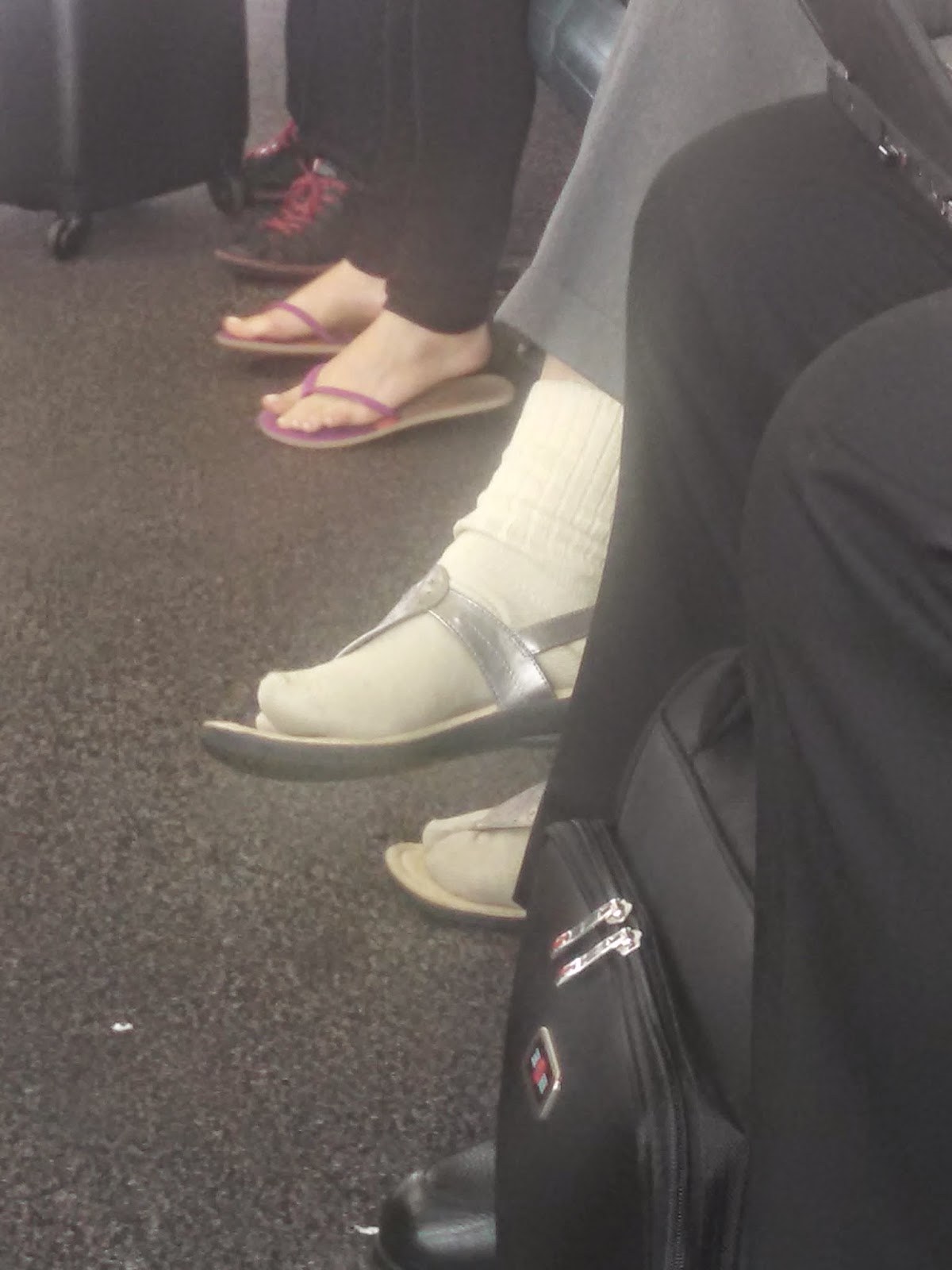 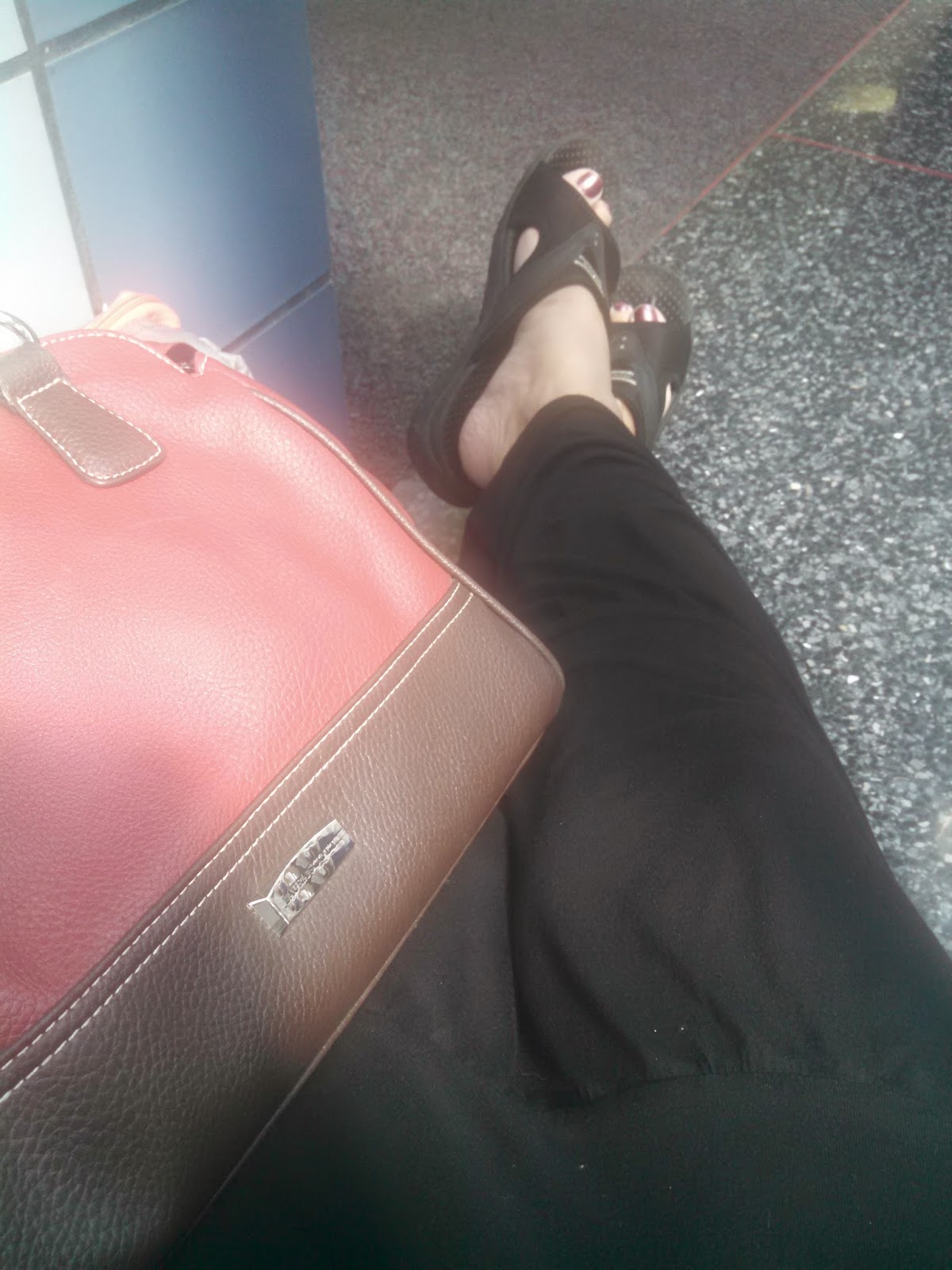 And I found the most spacious bathroom stall in any airport anywhere. I've read that in Japan, apartments are the same size 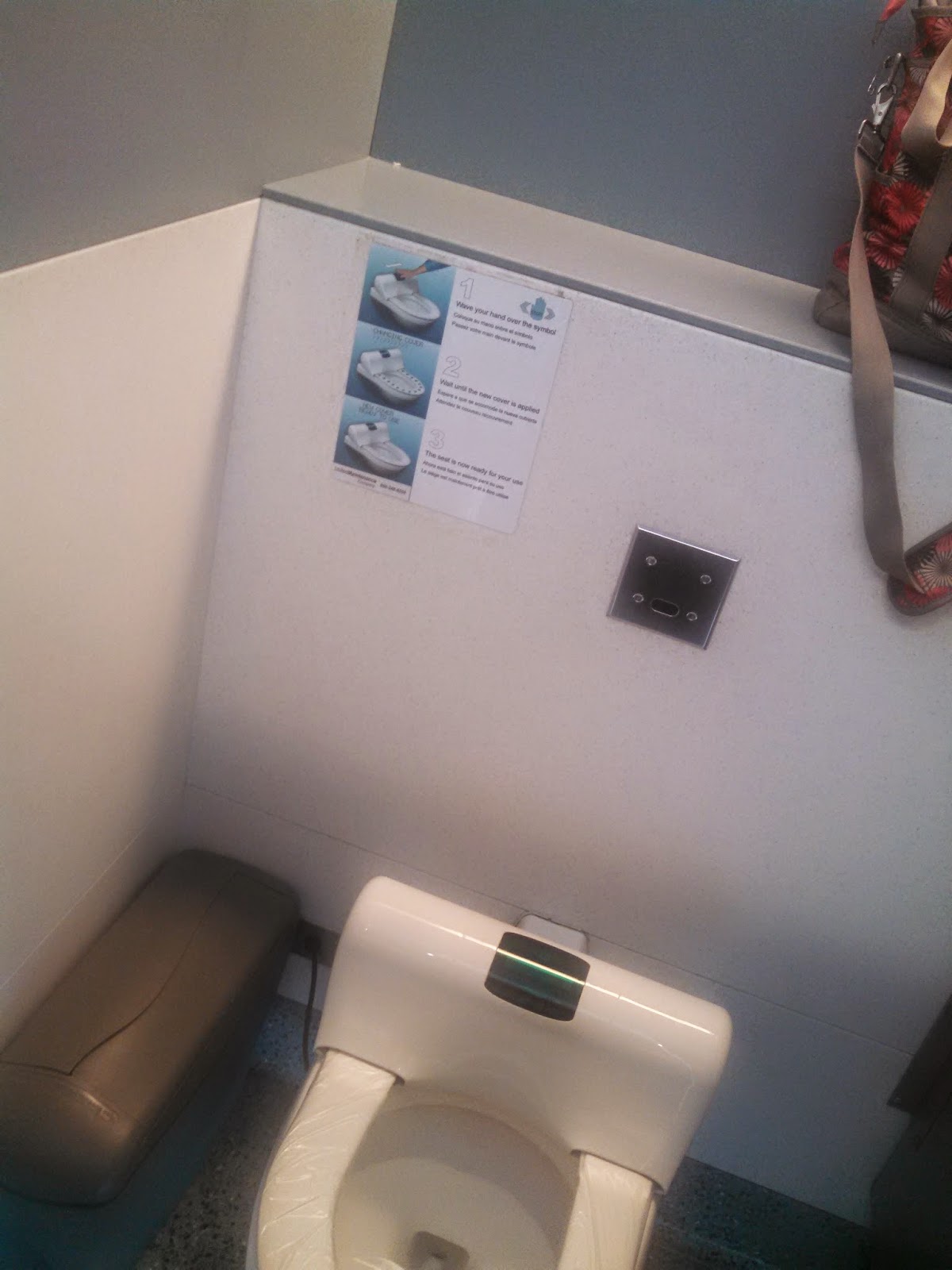 No joke, it was huge and I could actually turn around. Since everyone travels with their bags now, I don't know how some people can even get into a stall these days. And of course the door comes inward. This bathroom was wonderful.

I was all over Terminal I at O'Hare trying to help them. I figured if they could annoy me, I could annoy them. But as much as I tried to establish that relationship, they had no idea. Overall, as a hostess, I would give @United a 2 on a scale of 1-10. As a housekeeper, considering all the traffic at O'Hare, I would give @United a 7. I would rate their sense of humor at a 1, maybe a 0.

Then again, they get a lot of tweets. If you ever wants to feel good about a minor irritation in your life, go to Twitter and look at @United. In April of this year, USA Today ranked the nation's airlines and United came in last.

USA Today's article began with, "As an industry, airlines received the fourth-worst score in the American Customer Satisfaction Index (ACSI) rankings of customer satisfaction. Only pay TV, social media companies and Internet service providers rank lower. Even wireless carriers and car dealers rank higher. That may not be an indictment of the industry, but it does indicate a lot of room for improvement."

I still own my 2008 Camry although I would consider trading it to someone in exchange for a really good watermelon.

Yesterday I went to Dunkin Donuts because I had a coupon burning a hole in my pocket. It was mid-afternoon on a lazy day and I was sort of close by, so I drove in and decided to hit the drive-through.

There were cars parked over to the side of the lot the way most employees seem to park, but there weren't any cars out front. The only other time I have been to this place was last year at night and they only had one or two donuts left. Plus, and don't hate on me for this because the rest of the country seems to love their coffee, I don't love their coffee.

But the coupon was for iced coffee super cheap. So there I was.

I pulled up and I sat. Waited.

No one said a word. I thought perhaps they were closed, but the sign said that from 4-6pm, iced coffee was cheap. Super cheap, in fact. In fact, the 4-6pm price for iced coffee was the price of the coupon. But no one knew I was there and I decided I didn't need the calories, so I drove off sans iced coffee.

This morning I found myself near a McDonald's, which I know for certain was open because it was clearly open with people and cars and activity and McDonald's is always open.

I drove my top-secret stealth Camry up to one of the drive through speakers.

Her: "Hello, welcome to McDonald's. May I take your order?"

I waited quite a while and finally said, "Hello?" But there was no response.

Another car pulled up to the other speaker next to me and placed their order, so I left.

I should lease the car to the government for secret missions.
Posted by Caron at 11:02 AM 2 comments:

So here is another edition of answering someone else's questions.


1. When driving, are you more likely to listen to the radio, to CDs or an iPod, or nothing at all?
2. Do you prefer window or aisle?

3. Do you fall asleep on your side, back, or stomach? What position are you in when you wake up?
Fall asleep on my right side, wake up on my back.

4. When is the last time you attended a zoo, circus, carnival, county fair, or parade?
Last year's state fair.

5. Do you have a favorite quote or inspirational saying?
I did, but I don't. I have gotten to the point of thinking that inspirational sayings are pointless (much like this blog post) because we tend to be drawn to the one's that support our way of thinking rather than challenge our thinking. It all started with Pinterest and I saw all these sayings about following your heart and you know what? Your heart very often leads you astray. OK, actually it all started when I saw sayings on a particular person's Facebook page (all of us probably has a person like this) that scream, "I'm really insecure!" and that put a bad taste in my mouth. THEN I started seeing (on the same person's wall - we aren't "friends" any more) sayings about how it is OK to be yourself and it is OK to be imperfect and it is OK to make mistakes and yet this same person is a real witch about other people being themselves, being imperfect and making mistakes. So I'm saying no to inspirational sayings. Just say no. That's my inspirational saying.

As for quotes, I like a few. I constantly have to remind myself to keep my mouth shut, so that's the one I hear most often. But this is a favorite of mine:

“Oh, the comfort, the inexpressible comfort of feeling safe with a person; having neither to weigh thoughts nor measure words, but to pour them all out, just as they are, chaff and grain together, knowing that a faithful hand will take and sift them, keep what is worth keeping, and then, with a breath of kindness, blow the rest away.”

There are so few people in the world who can hear what you have to say without judging.

6. What's the best thing about summer?
The heat. I enjoy summer's heat. I like the sunshine and all the light. I like the produce as well.

What time is it?